The Executive Committee of the Division of Organic Chemistry of the American Chemical Society and the Department of Chemistry at the University of Maryland are pleased to announce an exciting speaker line-up at the 44th National Organic Chemistry Symposium. This biennial event will be held from Sunday, June 28 to Thursday, July 2, 2015 on the campus of the University of Maryland at College Park.  For attendees who wish to enjoy the July 4th celebrations in our nation’s capital on the Saturday after the NOS, the conference venue is about 45 minutes from downtown Washington DC by Metro and campus housing is available for after the conference.  For further information, see: https://organicdivision.org/NOS

After the successful launch of the inaugural symposium, 2nd Organic Chemistry Frontiers International Symposium will be held this coming April in Zhejiang University.

Meeting this year is a one-day free event, supported by the Royal Society of Chemistry and Department of Chemistry, Zhejiang University.

To find out more details, please see the event webpage.

Dr. Shi, Professor in Chemistry from Peking University, is now serving as an Editorial Board member of Organic Chemistry Frontiers. He received a BS degree in 1996 from the Department of Chemistry, East China Normal University. He further joined Shanghai Institute of Organic Chemistry, Chinese Academy of Sciences (SIOC, CAS) and obtained his PhD degree (2001) under the supervision of Professor Shengming Ma. He then moved to Harvard University as a postdoctoral researcher with Professor Gregory Verdine and later as a research associate with Professor Chuan He at the University of Chicago. In 2004, he joined the faculty of College of Chemistry and Chemical Engineering, Peking University and was promoted to full professor in 2008.

He has received many international awards, including the Mr. and Mrs. Sun Chan Memorial Award in 2014, OMCOS Award in 2013, and Tetrahedron Young Investigator Award in 2011 where he was the inaugural Asian recipient.

Dr. Shi was recognized for his seminal contribution in organometallic chemistry and catalysis, especially in the field of the activation of “inert” bonds and small molecules. So far, he has published more than 100 peer-reviewed papers which have been cited over 7,100 times by others.

To find out more about Dr. Shi’s research, please take a look at his publications on the Royal Society of Chemistry journals in the past 12 months: 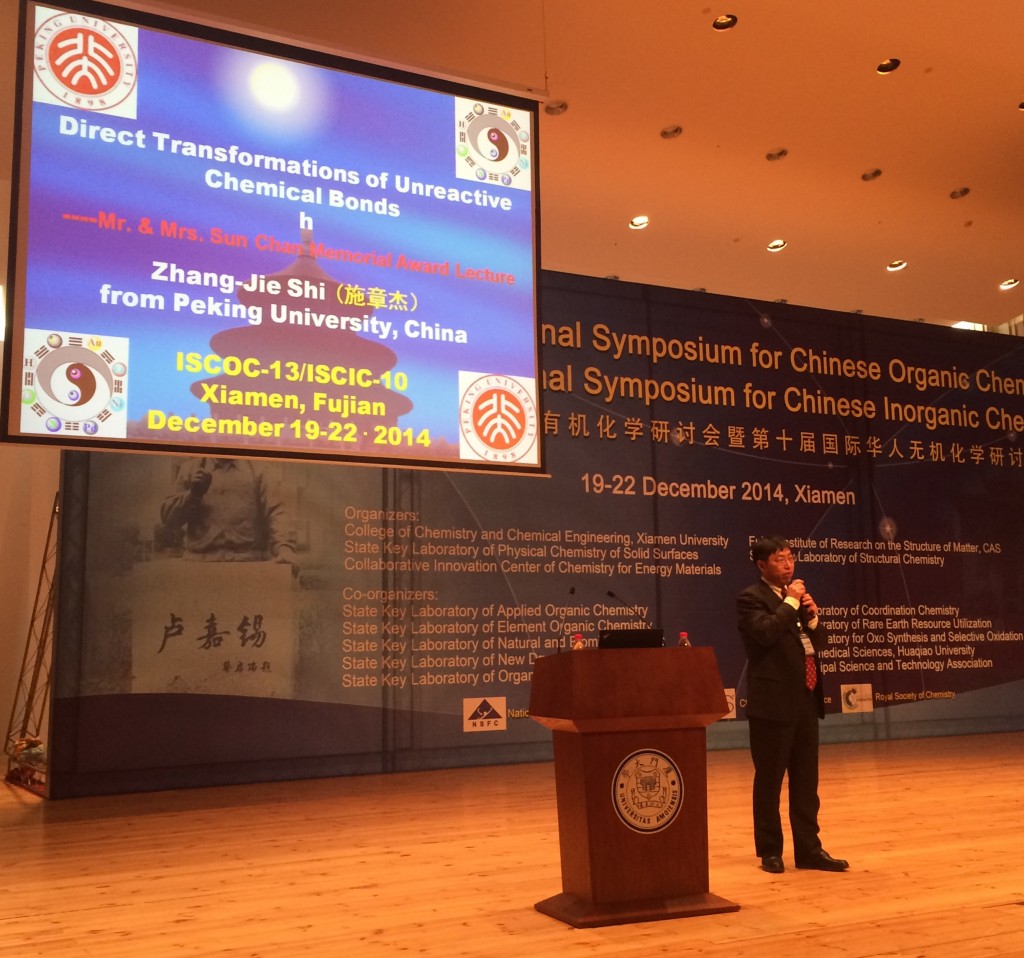 ISCOC and the Mr. and Mrs. Sun Chan Memorial Award in Organic Chemistry

Starting in 1990, the International Symposium for Chinese Organic Chemists (ISCOC) took place every other year and has become an important platform for bringing together worldwide Chinese chemists to exchange their scientific findings, cultivate mutual understandings, and foster possible collaborations.

The Mr. and Mrs. Sun Chan Memorial Award in Organic Chemistry was established by Professor Sunney Chan, director of the Institute of Chemistry of Academia Sinica in Taiwan, to recognize outstanding organic chemists under the age of 40 during ISCOC.

Organic Chemistry Frontiers is a proud supporter of ISCOC-13, sponsoring the poster prizes, the winners of which received a certificate and a copy of book from the Royal Society of Chemistry’s popular chemistry collection.

The Organic Chemistry Frontiers poster prizes were awarded to:

‘Total Synthesis of Taiwaniadducts B, C and D’

‘Construction of a tricyclic core of haliclonin A’ 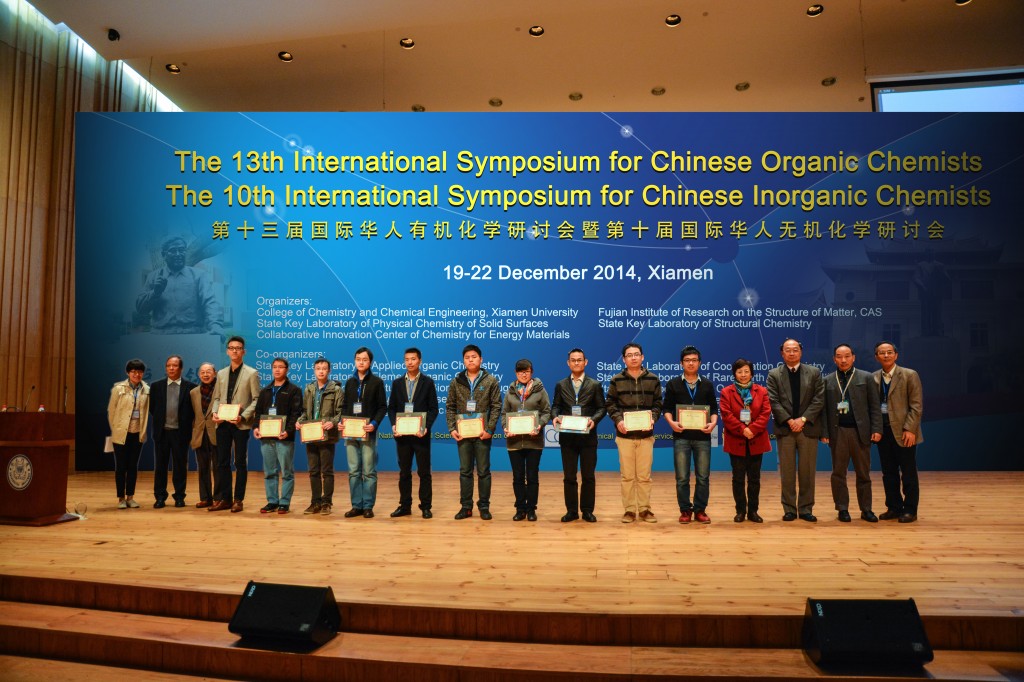 Winners for both ISCOC-13 and ISCIC-10, judges, scientific committee and RSC staff

The winners all receive a certificate and a copy of book from the Royal Society of Chemistry’s popular science collection.

Once again, our warmest congratulations to all our winners!

The 2014 RSC Organic Division Poster Symposium was successfully held on 01 December 2014 at the Royal Society of Chemistry, Burlington House, London.

This symposium provided a fantastic opportunity for final year organic chemistry PhD students to showcase their research and network with their peers, leading academics, and industrial chemists.

Organic Chemistry Frontiers was delighted to sponsor the Participants’ Prize and we would like to join in congratulating the winners.

Participants’ Prize (selected by the students) 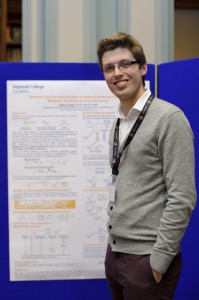 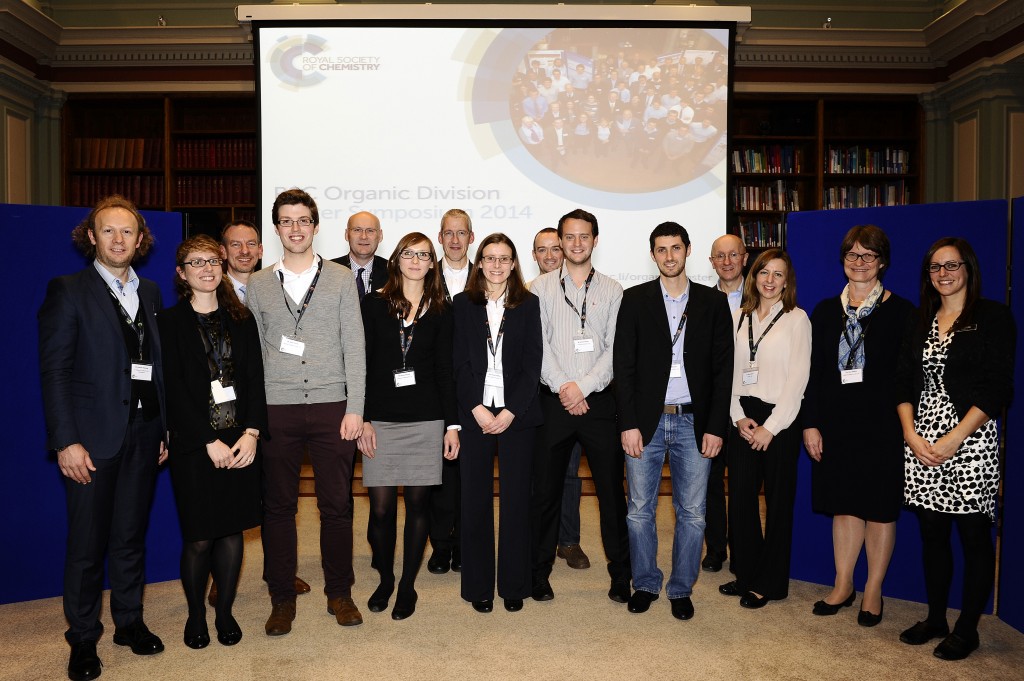 To mark the launch of Organic Chemistry Frontiers, a collaborative journal between the Chinese Chemical Society and Shanghai Institute of Organic Chemistry, a new series of international meetings entitled “Organic Chemistry Frontiers International Symposium” will take place annually in different countries. The aim is to bring together the world-leading scientists to communicate and discuss advancing research in organic chemistry, stimulating the exchange of ideas and experiences and fostering new research collaborations for the sake of better chemistry and better world.

The symposia are supported by Organic Chemistry Frontiers and the first meeting is being organized by the Royal Society of Chemistry and Shanghai Institute of Organic Chemistry. It is a one-day FREE event and will feature a selection of lectures focusing on the organic chemistry research, given by internationally renowned speakers.

To find out more about the speakers and programm, please visit the website (http://rsc.li/ocf), or simply contact us at OrgChemFrontiersED@rsc.org. Welcome to join us on this exciting event!