Metal-assisted asymmetric catalysis has proved to be one of the most efficient strategies to obtain high stereoselectivities in organic synthesis. High levels of chiral induction in a chemical transformation, together with high turn-overs of the catalyst, arise from the best match between the transition metal and the ligand. The widespread use of N-containing ligand precursors, as enantiopure building blocks, facilitates the synthesis of a broad scope of heterocyclic ligands, such as (bis)oxazolines, salens, and NHCs. The strong chelation properties of the bipyridine core with various metal ions made chiral 2,2′-bipyridines a very promising class of ligand to be used in asymmetric catalysis.

A first N2O2 tetradentate 2,2′-bipyridinediol was first synthesized in the early 90’s by Bolm and efficiently used in asymmetric catalysis. Later, the stability of Lewis acid complexes with this ligand was highlighted in highly enantioselective reactions run in aqueous media, where easily hydrolysable metal salts were transformed into water-compatible metal-complexes. With the objective of optimizing chiral inductions, tremendous efforts have been invested to design new C2-symmetric 2,2′-bipyridinediol derivatives.

Recently, the group of Thierry Ollevier and collaborators of Laval University in Québec, Canada, have disclosed the total synthesis of 2,2′-bipyridinediol (S,S)-1 in seven steps starting from commercially available 2-bromo-5-methylpyridine, with 25% overall yield and stereoselectivities up to 99% de and >99.5% ee (Scheme). The most crucial step for high levels of stereoenrichment of the ligand was demonstrated to be the oxidative homocoupling reaction, where the physical properties of the 2,2′-bipyridine N,N′-dioxides allowed removal of undesired diastereoisomers by silica gel column chromatography. X-ray studies revealed a favored complexation of (S,S)-1 that reaches heptacoordination of FeII.

The potential of (S,S)-1 for asymmetric induction for the FeII-catalyzed Mukaiyama aldol and thia-Michael reactions was highlighted. An increase of the chiral induction was demonstrated using the FeII catalyst made from newly synthesized ligand vs Bolm’s ligand. 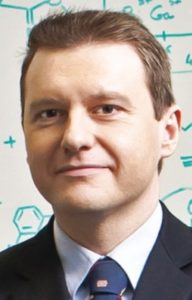 Thierry Ollevier is currently Full Professor in the Department of Chemistry at Laval University in Québec, Canada. He obtained his B.Sc. (1991) and Ph.D. (1997) at the Université of Namur (Belgium), and was post doctorate fellow at the Université catholique de Louvain (Belgium), under István E. Markó (1997), NATO postdoctorate fellow at Stanford University under Barry M. Trost (1998–2000), then post doctorate fellow at the Université de Montréal under André B. Charette (2000–2001). Current research in his group aims at designing novel catalysts, developing catalytic reactions and applying these methods to chemical synthesis. He is active in the areas of iron catalysis, diazo chemistry, asymmetric catalysis, and synthetic green chemistry. He is the author of more than 70 articles indexed by SCI and cited more than 2000 times.