Materials Chemistry Frontiers is pleased to announce a Webinar Celebrating Prof. Fred Wudl’ s 80th Birthday. It will focus on the topic of organic semiconductors showcasing the latest work from Fred Wudl and his friends.

Materials chemistry Frontiers is very pleased to be sponsoring the18th International Symposium on Macromolecule–Metal Complexes (MMC-18) that will be held from 10-13 June 2019 in Moscow, Russia.

Russia hosts MMC-18 in June 2019. Lomonosov Moscow State University with the support of International Union of Pure and Applied Chemistry (IUPAC) acts as the organizer of the Symposium.

MMC-18 will bring together top scientists and experts from all over the world to share and discuss the latest results in the fundamental aspects of:

MMC-18 will take place on a boat that cruises the Volga River with daily stops at historic sites. We will visit Uglich, Mishkin, Tver. A huge number of attractions and unique architectural sites are concentrated in these towns. Today they are picturesque places where you can relax from the hustle of the metropolis, enjoy nature and get acquainted with Russian history.

Submit the abstract and register the MMC-18!

Comments Off on 18th International Symposium on Macromolecule–Metal Complexes (MMC-18).

This year’s conference is co-organized by the Materials Research Society of Korea and the International Union of Materials Research Societies. Since the first conference was commenced, this meeting has become a fundamental ground to exchange quality results and ideas provided by the researchers and scientists within universities, industries and institutes. Furthermore, it also provides a forum to present the cutting-edge research outputs for future collaborations which would help both students and researchers within their future research studies and works to be conducted.

Find out more about this conference from the official website!

Materials Chemistry Frontiers is pleased to be sponsoring the 14th International Conference on Organic Electronics – 2018 (ICOE-2018) to be held on June 18 – 22, 2018 in Bordeaux, France.

ICOE is an annual serie of conferences dedicated to the state-of-the-art research in organic electronics. The ICOE-2018, organized by Professor Guillaume Wantz, Associate Editor of Materials Chemistry Frontiers, will bring together the most excellent researchers from academy as well as industry to discuss fundamental aspects of organic semiconductors, demonstrate their vision of the road-map of organic electronics and to exchange ideas on future materials, technologies, and applications.

Comments Off on 14th International Conference on Organic Electronics – 2018

Materials Chemistry Frontiers is pleased to be sponsoring the 2018 Asia-Pacific Hybrid and Organic Photovoltaics Conference (AP-HOPV18) to be held in Kitakyushu, Japan from 28-30 January.

Building upon the successes of the previous conference, AP-HOPV18 will provide an excellent opportunity for scientists and engineers worldwide to exchange information and discussions on the latest developments in photovoltaics and topics to be discussed at the conference include:

The deadline for abstract (poster) submissions is 9 November 2017 and more information about AP-HOPV18 can be found here. 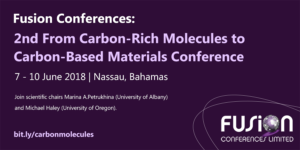 This interdisciplinary conference will feature a number of plenary and invited talks from leading scientists. Major focus areas will range from newly designed methods of chemical synthesis, characterization, and structure determination of carbon-rich molecules and carbon-based materials to measurements of their functional properties and investigations into their potential practical applications.

Materials Chemistry Frontiers Associate Editor Shu Seki and Natalia B. Shustova are also being invited to the conference as speakers.

Register early for reduced fee by 7th December 2017 at the conference website!

Materials Chemistry Frontiers is pleased to be sponsoring the following conferences taking place in Rennes, France in 2018.

Register early for reduced fee by 14th November at the conference website. 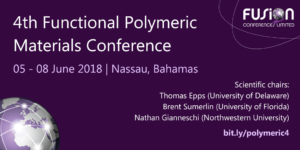 The fourth FPM series will bring together leaders in polymers and polymeric materials from around the world to describe their most recent and cutting edge discoveries. The aim of the conference is to capture the multidisciplinary nature of polymer chemistry with topics spanning “basic synthesis and methodology” to “nanoscale and bioinspired materials”.

More information about the themes and speakers at this conference can be found here. 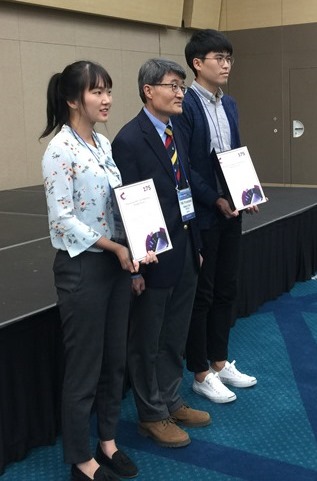 Winners of Materials Chemistry Frontiers Poster Prizes are as follows.

The winners were selected by a panel of judges and all received a certificate to recognize their achievement. Congratulations to Min Jun Oh and Sanghee Yang! 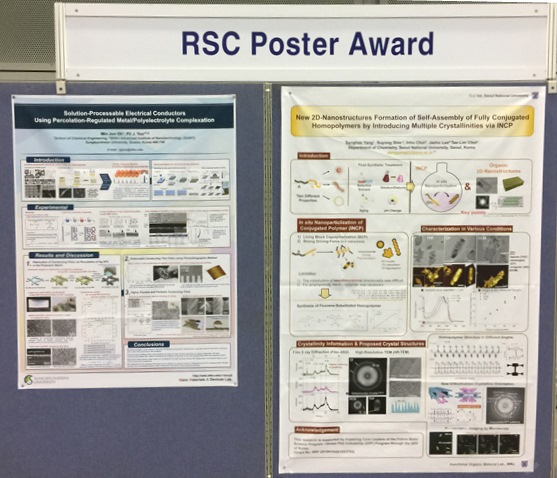 Comments Off on Congratulations on IUPAC-PSK40 Poster Prize Winners

Congratulations to our Materials Chemistry Frontiers Poster Prize winners at the 16th International Conference on Polymers and Organic Chemistry in Hersonissos, Greece!

This conference is organized under the sponsorship of the International Union of Pure and Applied Chemistry (IUPAC) nd under the auspices of the University of Crete. It aims to provide a forum for exchanging information, results and advances among scientists working in the areas of polymer synthesis, characterization, and applications, with an eye towards organic chemistry. 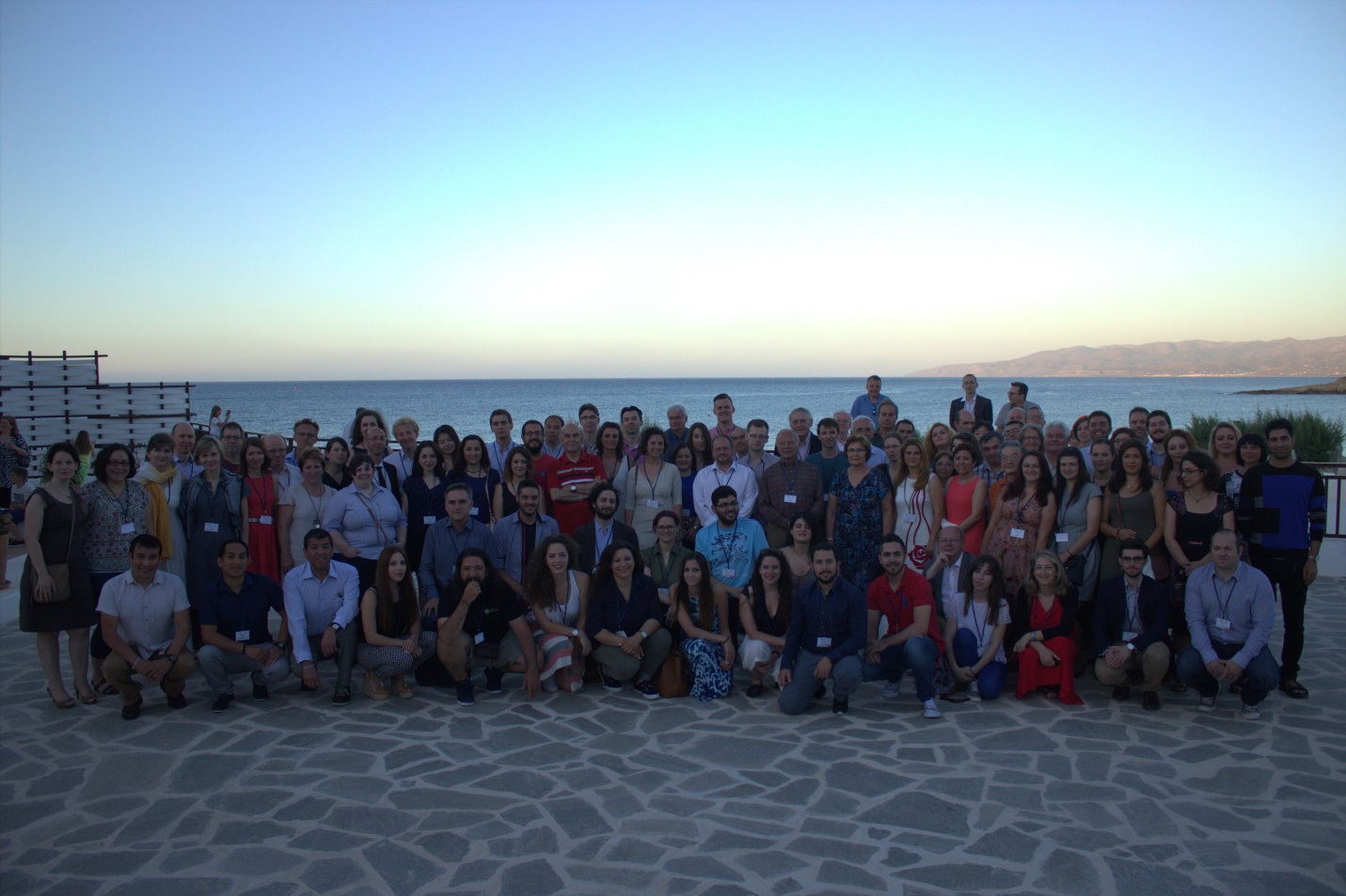 The Poster Prize winners were as follows: 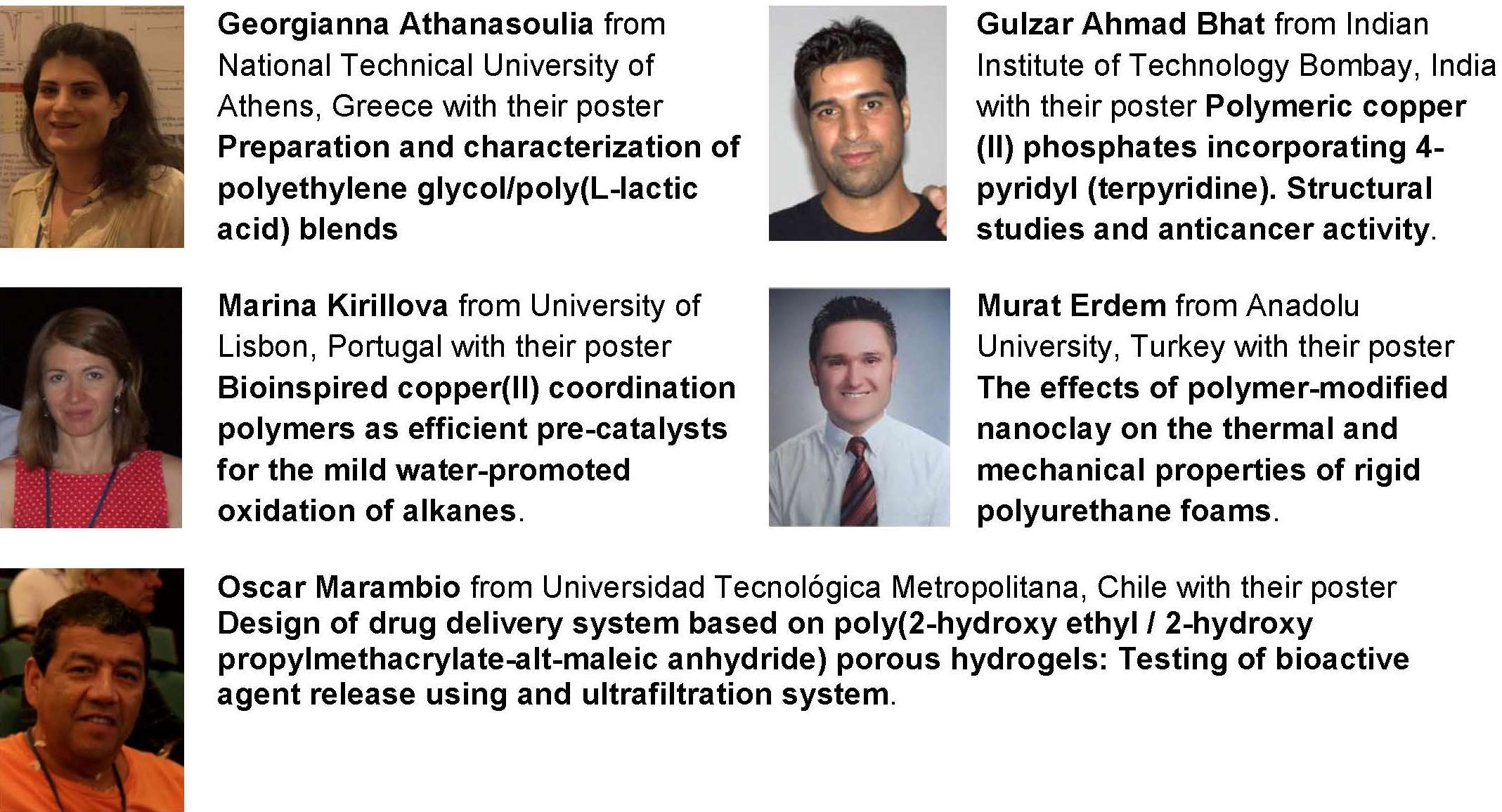 The winners were selected by a panel of judges and all received a certificate to recognize their achievement.

Well done to all our five winners!

Comments Off on Congratulations on POC-16 poster prize winners!