When a molecule absorbs light, electrons can be excited to higher energy states. Multiple ways exist for the extra energy to be released, including emitting photons in radiative processes. The competition between radiative and nonradiative relaxation pathways dictates that the faster the process is, the more likely it is to occur. As such, for light emitting devices, the radiative decay needs to be fast to decrease losses in non-radiative relaxation. On the other hand, for light harvesting devices, it is important that the radiation is suppressed. Hence, it is crucial to control the radiative rate to achieve higher efficiency in light emitting or harvesting devices. Besides altering the chemical structures of fluorophores, the design of their dielectric environment provides a straightforward means of altering their fluorescent properties. Control of radiative rate has been thoroughly achieved and understood for inorganic photonic structures, whereas it is less so for organic ones. However, for the future of flexible devices, it is important to explore this effect in polymer structures so that they can be easily integrated in device design. A promising polymer photonic structure is a microcavity formed by two polymer dielectric mirrors sandwiching a very thin layer of fluorescent material as schematized in Fig. 1a. The dielectric mirrors consist of alternating thin layers of materials with high and low refractive index, which form a photonic crystal with high reflectance that can be engineered in the desired spectral range, making them more efficient than metallic ones. Additionally, they are easy to fabricate from solution.

Recently, researchers at the Rely photonics group at the University of Genoa and their collaborators at the National Research Council in Genoa demonstrated radiative rate change in microcavities incorporating an NIR emitting dye (Fig. 1b). The cavities employ dielectric mirrors consisting of the low-index fluorinated polymer Aquivion and a high-index polyvinyl carbazole, which together present the highest dielectric contrast reported so far for polymer mirrors. The samples are almost completely transparent to visible light (Fig. 1c), but strongly reflect light from 750–870 nm (Fig. 1d). This has been designed to reflect the fluorescence of a stable dye of choice. However, there is an allowed microcavity mode that has lower reflectance intensity at 850 nm.

Figure 1. (a) Schematic of the microcavity structure. (b) Structure of the NIR dye used. (c) Photo of an NIR-Reflecting microcavity. (d) Transmittance spectrum of microcavity.

The dielectric mirrors change the density of states available for photons, making it highly intensified at the microcavity mode (red arrow in Fig. 1d at 850 nm), and change the fluorescence intensity and kinetics. A series of references were fabricated in order to compare the effects of the microcavity. Compared to a film of the dye in polyacrylic acid matrix, the fluorescence intensity in the microcavity is nearly completely suppressed except at the cavity mode where it is amplified 15 times as strongly. (Fig. 2a).

Figure 2. Comparison between fluorescence of the dye/polymer film and the microcavity regarding (a) spectral intensity and (b) fluorescence lifetime.

Fluorescence intensity amplification at the microcavity wavelength is a commonly reported phenomenon. On the other hand, change in the fluorescence lifetime is rarely reported. However, it has been observed in this work (Fig. 2b), where lifetime decreased in the cavity compared to the reference film. Further measurements exclude any unintended effects and confirm that indeed the radiative rate does decrease due to cavity effects.

This significant change in the lifetime was achievable thanks to the high refractive index contrast achieved by the researchers. The system is highly promising for future implementation in devices. Further development of structures achieving higher contrast and using sharper emitters is needed to increase the radiative rate in order to improve performance of light emitting devices. 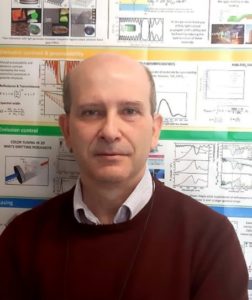 Davide Comoretto was born in Milano, Italy, in 1963. He graduated with a major in Physics in 1988. In 1993 he obtained a PhD in Chemical Sciences and was then enrolled as Research Scientist at the Department of Chemistry and Industrial Chemistry of the University of Genoa where he is now Full Professor of Industrial Chemistry. During his research activity, he worked at the Institute of Macromolecular Chemistry – CNR (Milan, Italy), the Department of Physics “A. Volta” (University of Pavia, Italy) and at the Institute for Polymers and Organic Solids at the University of California Santa Barbara (USA) in the group chaired by Prof. A. J. Heeger. He is the Team Leader of the Rely Photonics research group focusing on design and fabrication of functional solution-processed photonic crystals and spectroscopy. The main topics are related to emission control, sensing, thermal shielding, engineering and fabrication of metamaterials, light harvesting enhancement in photovoltaics, and photocatalysis.