The efficient semihydrogenation of internal alkynes to selectively produce either E– or Z-alkenes is one of the main challenges in homogeneous catalysis. Numerous systems were reported in the past, however, such reactions typically require either the use of gaseous hydrogen at high pressure, noble metal catalysts, or rather high catalyst loading at long reaction times, the latter resulting in alkene isomerisation or overreduction to produce alkanes. Amine boranes such as ammonia borane (H3B·NH3) are known to be well-suited for transfer hydrogenation reactions, providing stoichiometric amounts of H2 either by dehydrogenation (i.e. H2 production), followed by hydrogenation, or by stepwise hydride and proton transfer to an organic substrate. Homogeneous precatalysts based on the Co(II) oxidation state have been reported in the past, however, mechanistic insights into such systems were rather limited to date.

Recently, the groups of Jiao and Beweries at LIKAT Rostock have demonstrated that PNN(H) Co(II) complexes serve as very efficient precatalysts for the selective formation of E-alkenes at very mild conditions, suing MeOH and H3B·NH3 as the hydrogen source. This reaction is suggested to take place exclusively via the Co(II) oxidation state, which was corroborated though a combination of control experiments, EPR spectroscopy, and DFT analysis. Key feature for the high activity of this Co system is the proton responsive PNN(H) ligand, possessing a pyrazole fragment that undergoes deprotonation during catalyst activation. The results presented herein could be relevant for the design of other proton responsive ligands for non-noble metal free transfer hydrogenation reactions. 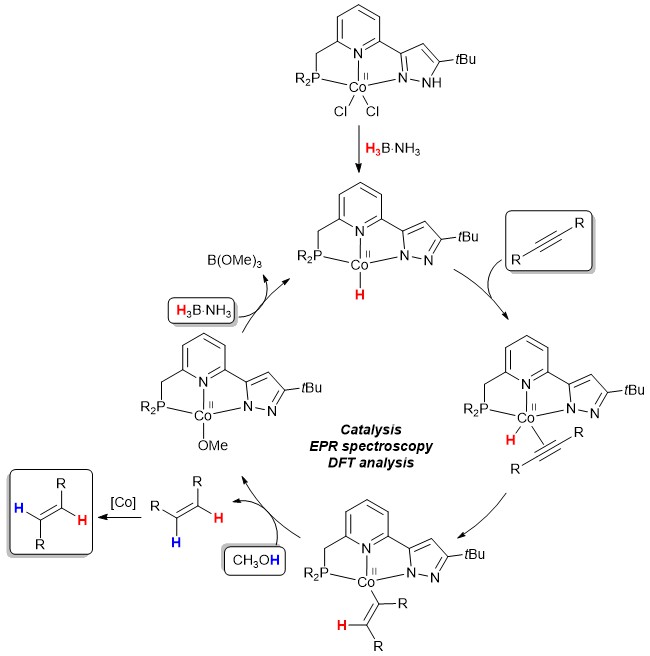 Torsten Beweries is head of the department Coordination Chemistry and Catalysis at the Leibniz Institute for Catalysis in Rostock (Germany). He received his PhD in Chemistry at LIKAT in 2008, working on the coordination chemistry of hafnocenes. He then moved to the University of York (UK) for a postdoctoral stay with Prof. Robin N. Perutz in 2009, working on late transition metal complexes for halogen bonding. He returned to LIKAT in 2010, where he established an independent research group. The research field of PD Dr. Torsten Beweries is organometallic chemistry and homogeneous catalysis with focus on new pincer ligands and complexes, main group polymers, and unusual metalacyclic systems. He is the author of 91 articles indexed by SCI and cited more than 1600 times with an index H = 23.