Arylamines are an important molecular unity that is widely used in the design and creation of organic functional materials for applications such as solar cells, light emitting diodes, and electrochromic devices. Due to their electron-rich nature, these molecules can be readily oxidized into radical cations, whose persistence is essential for the performance of organic electronic devices.

The properties of arylamines and their oxidized radical cation states can be modulated by coordination with transition metals at the nitrogen site, because of the inductive effect from the metal, and the interactions between the p-orbital on the nitrogen atom and the d orbitals of the metal center.

In the past few years, the Ozerov group and collaborators at Texas A&M University demonstrated synthesis and redox properties of several bimetallic pincer complexes with arylamine backbones, where two pincer-type metal cores were connected by non-conjugated linkers or ynediyl linkers via metal-ligand bonds. Recently, in collaboration with the Fang group at Texas A&M, they reported the synthesis of bimetallic complexes where two redox sites are connected with via organic ligand-to-ligand linkers that modulate the degree of separation between redox sites (Figure 1). 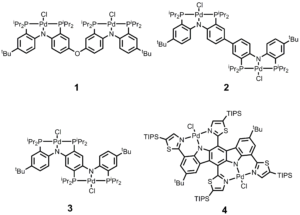 Cyclic voltammograms of all these complexes revealed two quasireversible oxidation waves. For 1-3, the separation of the two oxidation waves increased as the proximity between two redox sites increased. The comproportionation constants were calculated, which revealed that compounds 2, 3, and 4 belong to the Robin-Day Class III mixed valence systems, whereas compound 1 falls into the range of Class II. The largest comproportionation constant of 3.1×1011 was found in compound 3, suggesting the high stability of this radical cationic intermediate. UV-vis-NIR spectra of the radical cations of 2, 3, and 4 showed intensive absorption peaks in the NIR region, revealing the highly delocalized nature of these radical species. The Hush electron coupling integrals of these mixed valence molecules fall into the range of Class III systems, which is in a good agreement of the cyclic voltammetry analysis. 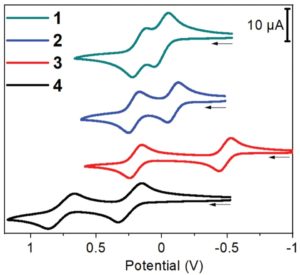 Single-crystal diffraction was performed to establish solid-state structures of compounds 3, as well as its oxidized states, to shed the light on the mechanism of its oxidation process. The geometric differences among these structures lie mainly in the changes in the bond distances associated with the central p-diaminobenzene unit, which revealed the transformation from a benzenoidal structure to a quinoidal structure (Figure 3).

In conclusion, the square-planar palladium center imposes a more rigid geometry on the organic ligand that leads to different degrees of the pi delocalization over the extended system. A stronger electronic communication between two redox sites was found at a closer proximity between them. Such a presence of palladium centers is important in stabilizing the mono- and bis-oxidized forms of these molecules. These bis(pincer) complexes are potential building blocks for more complicated conjugated molecules and polymers that can find applications in organic electronic devices. 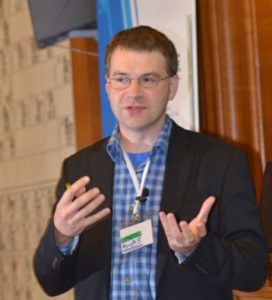 Oleg Ozerov is Emile and Marta Schweikert Professor in the Department of Chemistry at Texas A&M University.  He received his Diploma (1998) from the Higher Chemical College of the Russian Academy of Sciences and his PhD degree (2000) from the University of Kentucky where he worked with Prof. Folami T. Ladipo.  Following a postdoctoral appointment with Prof. Kenneth G. Caulton in Indiana University (2000-02), Dr. Ozerov started his independent academic career at Brandeis University, before moving to Texas A&M in 2009.  He is a recipient of the ACS Award in Pure Chemistry (2012) and of the Norman Hackerman Award in Chemical Research from the Welch Foundation (2012), and has served as an associate editor of Inorganic Chemistry Frontiers since 2013.  The Ozerov group pursues studies in molecular transition metal and main group chemistry. 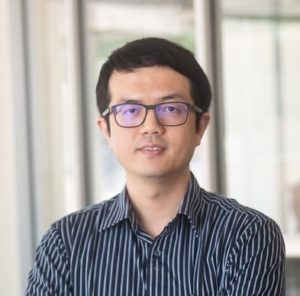 Lei Fang is an associate professor in the Department of Chemistry at Texas A&M University. He received his BS (2003) and MS (2006) degrees from Wuhan University. His PhD study was started at University of California Los Angeles in 2006, and completed at Northwestern University in 2010, under the mentorship of Sir Fraser Stoddart. Subsequently, he spent two and a half years at Stanford University as a postdoctoral scholar working with Professor Zhenan Bao. In 2013, he joined the faculty of Texas A&M University, where he currently leads a multidisciplinary research team focusing on functional organic materials.