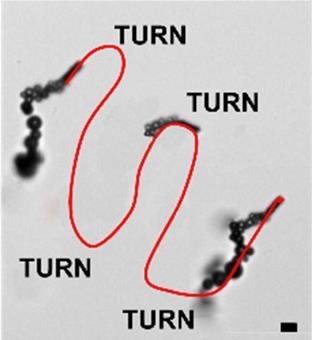 Micromotors have been used for a wide range of applications, from hydrogen generation and bacteria capture, and now scientists from the University of Alcalá, Spain have utilised these useful micromachines in a lab-on-a-chip device. The little machines can navigate through the confined space to carry out fluorescence-based detection and even transport cargo in a complex medium that simulates blood plasma. There is no need for complex valves or pumps, just a simple magnetic field.

Described by nanobioelectronics and nanomotor experts as “a wonderful example” of carbon-based rockets for active transport showcasing a “potential breakthrough” as one of “very few practical applications”. Of particular importance is the incorporation of an anti-fouling layer that allows the micromotors to travel through complex mediums without degrading. This has the potential to overcome on of the key limiting factors in the advancement of biomedical applications in this field.

Theoretical scientists have predicted SiC7 – a new phase of the graphene–silicene hybrid siligraphene, which if synthesisable, could revolutionise flexible optoelectronic devices such as solar cells.

SiC7 siligraphene has an interesting structure with a graphene-like honeycomb lattice, but unlike graphene, its hexagonal rings are irregular. The scientists expect SiC7 siligraphene to be much better than SiC2 siligraphene and single-layer black phosphorus at absorbing sunlight. Additionally, broken symmetry caused by silicon doping would create band gaps that boost its optoelectronic properties.

The original article is free to access and can be read at:

A pen that performs 3D printing on the nanoscale has been developed by scientists in South Korea.

The pen, created by Seongpil Hwang of Korea University and co-workers, amalgamates the precision of atomic force microscopy with a diffusion limited current from a microscopic electrode.

At its tip, the pen has a microscopic hydrogel pyramid, the sharp apex of which is soaked in an electrolyte for electrochemical reactions. A nanometre-scale area for reactant mass transport results from contact between this tip and an ultramicroelectrode. Controlling this contact with a nanopositioning system regulates a faradaic reaction that enables electroplating to give precise nanostructures; in this case 3D structures of platinum were deposited on a gold electrode – some with dimensions less than 100nm.

To read the full article visit the Chemistry World website.

The paper is free to read in Nanoscale until 13 January 2015:

Researchers in China are hoping to expand the unconventional applications of graphene with their introduction of graphene springs that can function as actuators.

Springs are fundamental components in numerous electronic and mechanical systems. Most commercial springs are made of metal. Carbon-based springs, however, are less advanced, but have the potential to be a lightweight option if their

poor elasticity can be tackled.

Now, graphene springs made by Liangti Qu and colleagues, at the Beijing Institute of Technology, succeed where traditional carbon-based springs have failed.

Implantable medical devices of the future could be built from a new material that is made by layering bacterial cellulose hydrogels with conducting polymers.

Bacterial cellulose (BC) is a naturally occurring polymer hydrogel that is flexible and known to respond to environmental changes. Guang Yang and co-workers at Huazhong University of Science and Technology in Wuhan, China, added a layer of conductive polymer polyaniline (PAni) onto a BC hydrogel to give a material that responds to electrical signals.

The base cellulose hydrogel is made by Gluconacetobacter xylinum bacteria. After purification, the hydrogel is soaked for 48 hours in a solution of salts and aniline monomers. The gel is then sandwiched between two electrodes, and applying an electrical current causes the monomers to form a polymer film layer.

Encryption at the flick of a light switch: Nanoscale article in Chemistry World

Scientists have designed a grid of light responsive colloidal particles to function as pixels that could be used to create barcodes for cryptographic data storage.

Clemens Weiß and his colleagues at the Max-Planck Institute for Polymer Research in Germany, have devised a way to use this kind of light triggered dye switch to store data. Encapsulating the photochromic/fluorescent dye pair inside polymer colloids traps the molecules together prolonging the lifetime of the ‘on’ or ‘off’ state for several days. Assembling these functional colloids within a monolayer of larger colloids creates a grid of fluorescent ‘colloidal pixels’. Shining UV light on chosen areas of the grid turns the pixels’ fluorescence off creating dark areas on the grid whilst leaving others fluorescent.

Graphene could find use in next-generation flexible electronic devices thanks to scientists in Taiwan and the US who have developed a low cost and scalable method to pattern graphene onto 3D surfaces.

Flexible electronics are destined to transform the way we manufacture and interact with electronic devices. Graphene’s high electrical conductivity and mechanical stability could prove beneficial in flexible electronic circuits. However, despite its potential, graphene is typically only produced and patterned in research environments with economic barriers hampering its use in commercial applications.

Scientists can now experiment at the atomic scale with unprecedented accuracy in new ‘silent’ laboratories in Switzerland. These labs are shielded against all possible forms of background disturbances – external vibrations, acoustic noise, electromagnetic fields and temperature fluctuations. It is hoped that the labs, devised by Emanuel Lörtscher and his team at IBM Zurich, will accommodate the demands of nanotechnology for the next 20–30 years.

When probing or building structures at the nanoscale, experimental readings are so tiny that they are easily drowned out by any background noise – without a well-proofed lab, someone using the lift next door could ruin your results. 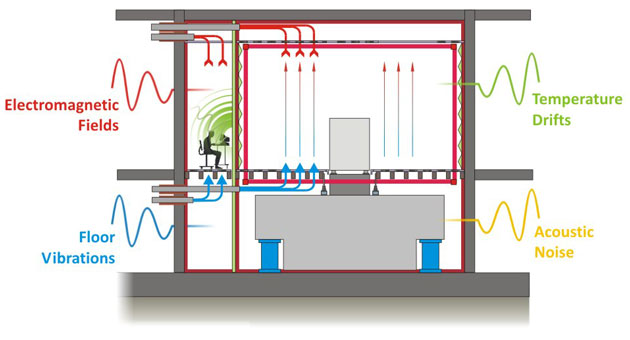 Read the article by  E Lörtscher, D Widmer and B Gotsmann in Nanoscale: 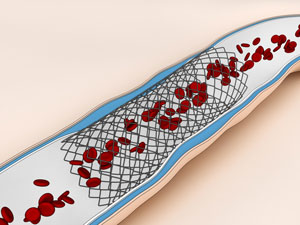 Scientists in the US and China have developed a biodegradable alloy for use in medical implants. The new alloy, called JDBM, mixes magnesium, neodymium, zinc and zirconium. JDBM degrades uniformly in physiological conditions so further surgery to remove implants made from it would not be necessary.

Atherosclerosis is a precursor to heart disease and occurs when artery walls thicken from cholesterol build-up. Surgical atherosclerosis treatment uses a mesh tube called a stent to restore blood flow in blocked blood vessels. While most currently used stents are non-degradable and require further surgery to remove them, stents made from JDBM by the teams of Rong Fan at Yale University and Guanyin Yuan at Shanghai Jiaotong University will degrade in the body so won’t need to be removed.

Read the article by L Mao et al. in Nanoscale: 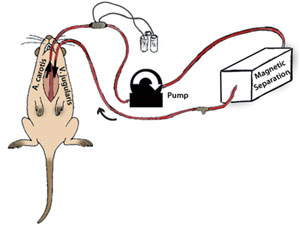 Nanoparticles that never have to enter the body can capture harmful components in blood, scientists in Switzerland have shown.

Removing unwanted molecules from the blood is the most direct way to cure or prevent many illnesses. An example of this approach is dialysis where small molecules like urea are filtered out to treat patients with renal failure. As this separation method is size-selective, larger noxious molecules or cells cannot be efficiently eliminated from the blood in this way.

Read the article by  I K Herrmann et al. in Nanoscale: