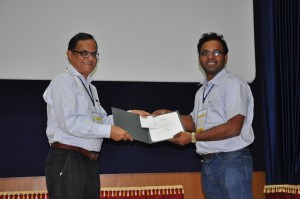 Many congratulations to G. Rajaraman and E. Manikandan for winning the Nanoscale poster prizes at Nano India 2015.

The conference was hosted by the Centre for Nanotechnology & Advanced Biomaterials (CeNTAB), SASTRA University, Thanjavur, on the 29-30th  January 2015. It is a national conference supported by the Department of Science & Technology (DST), and aims to promote the exchange of ideas and create a platform for collaborative research in interdisciplinary areas of nanoscience and nanotechnology. Further details are available on the conference website.