We warmly welcome Professor Shunichi Fukuzumi (Osaka University, Japan) as a new member of the Chem Soc Rev Editorial Board. 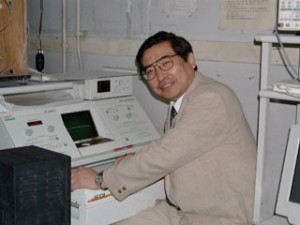 Shunichi was born in Nagoya, Japan, and received his BSc and PhD degrees from the Tokyo Institute of Technology in 1973 and 1978, respectively.  After a post-doctoral position at Indiana University, he joined the faculty at Osaka University in 1981, where he was promoted to full professor in 1994.  In 2013, he was selected as a special distinguished professor at Osaka University, where he served as Director of a Global COE program from 2007 to 2011 and where he is currently the Director of an ALCA  (Advanced Low Carbon Technology Research and Development) project of Japan Science Technology Agency (JST).

Work within the Fukuzumi lab at Osaka University focusses on artificial photosynthesis and electron transfer chemistry.  Shunichi has published over 900 articles with over 25,000 citations and holds 43 patents. He was the recipient of the 2004 Chemical Society of Japan (CSJ) Award, and was awarded a Medal with Purple Ribbon by the Emperor of Japan in 2011.

Read more about Shunichi’s research in some of his latest articles and a recent ChemComm interview: