Polydimethylsiloxane (PDMS) is widely used for the fabrication of microfluidic systems because it can readily be molded into the desired shape, is easy to seal onto substrates, and is transparent thus permitting visualization of the sample [1]. However, the fabrication of PDMS microfluidic devices depends on a microfabricated mould that needs to be made in a clean room using photolithography and microfabrication methods, all of which are costly and time consuming and beyond the reach of many researchers. Rapid prototyping techniques that circumvent the requirement for a clean room have been proposed, such as the use of double sided scotch tapes, but lack precision and control [2,3].

Here we present a method for rapid prototyping of branched microfluidics in PDMS with control over the architecture, channel width and depth. We propose using capillaries as the mould.  They are cut to size, then arranged on a flat PDMS according to the desired architecture and covered with PDMS which is then cured. The size of each channel can be adjusted by selecting a capillary with the desired diameter, and different branch architectures can readily be produced. The capillaries are then simply removed from the PDMS replica and leave behind a network of channels.

A key challenge is the gaps formed at the intersections between abutting capillaries. We found that a small flake of paraffin can be used which is then melted to fill up this gap. The use of capillaries with a square cross-section further facilitates the moulding, and allows for making complex networks with ease and good yield. This protocol only requires materials which are commercially available and comparatively inexpensive and takes less than one hour of hands-on time, followed by three hours of curing. 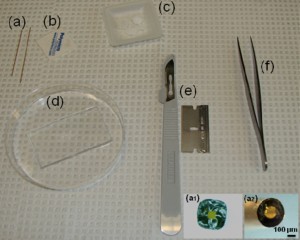 1. Cure a layer of PDMS in a Petri dish. Remove the PDMS, and cut it to the desired size. Flip this piece to obtain the flat surface on top and place it inside another Petri dish as shown in Figure 2. 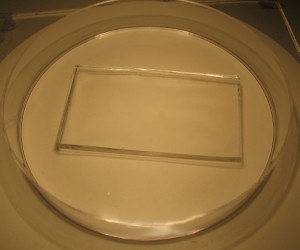 2. Cut two pieces of capillary, Figure 1a (or as many needed to make the branched channels) using a ceramic cutting stone. The capillaries should be cut to a length that facilitates handling, typically three or more times the length of the final channels of interest and shorter than the diameter of the Petri dish. Also see “What else should I know I”. After cutting the capillaries, dip their tip at each side in melted paraffin or liquid glue and let it solidify. This helps prevent air trapped in the capillaries from exiting while degassing the PDMS, which can lead to bubbles and displacement of the capillaries.

3. Under the stereomicroscope grind the tip of the capillaries (which will be making the connections between capillaries) to remove the bumps seen in Figure 3a using a polishing stone, such as the side surface of a cutting stone, with horizontal movements, Figure 3b and flatten the tip completely, Figure 3c, which can be done at angles other than 90 degress as well, Figure 3d.

Figure 3. A square capillary before (a) and after grinding with the ceramic stone (b) and flattening its tip into a right angle (c) and other angles (d)

4. Stick double-sided tape at the outer extremities (preferably not at the connection sites) where the capillaries will be placed on the flat PDMS in the Petri dish, Figure 4a. Under a stereomicroscope place the capillaries according to the desired architecture. Figure 4b illustrates the placement of capillaries for fabricating T-shaped microchannels.

Figure 4. Placing the capillaries on the flat PDMS held by double side tape

5. Examine the gaps and connections between the capillaries to ensure good contact. A T-shaped connection and 45 degree connections are shown in Figure 5 below.

Figure 5. Different connections between capillaries: (a) Capillary connection in T-shape with a right angle and (b) connections with acute angles

6. Carefully place a small piece of paraffin using sharp tweezers on each of the capillary connections, Figure 6a. Heat the tip of the tweezers on a hot plate for a minute, and then carefully approach the tip to melt the paraffin, which fills the gaps between the capillaries due to capillary effects and joins them to one another, Figure 6b. The excess melted paraffin can be removed carefully wiht the tip of a razor or sharp tweezers.

7. Pour a layer of uncured PDMS over the connected capillaries as shown in Figure 7 and degas the PDMS by placing the Petri dish in a vacuum desiccator to remove all air bubbles, for alternative methods see “What else should I know II”. Then, place the Petri dish in the oven at 65°C for 3 hours or more. For shorter curing time see “What else should I know III”. 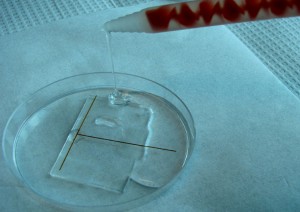 8. Remove the whole piece of cured PDMS from the Petri dish. Cut the sides of the cured PDMS using a razor blade, leaving a significant amount of the capillary exposed outside as shown below. Then carefully pull out the capillaries from the sides of the PDMS using pliers as shown in Figure 8. To make this process easier, the network can be immersed into or washed with acetone which will swell the PDMS and expand the channels prior to pulling out the capillaries. 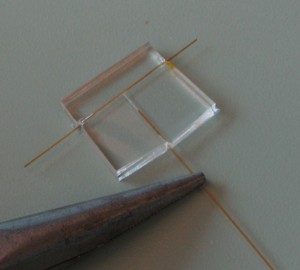 Figure 8. Pulling off the capillaries after the PDMS is fully cured

9. Trim the microfluidic device to the desired shape using a razor blade or a cutter, Figure 9. 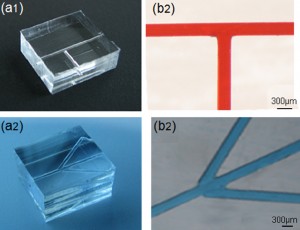 Figure 9. Fabricated branched microfluidics (a). Microchannels filled with red and blue dye (b).

What else should I know?

I) To fabricate an open channel microfluidic network replace the flat cured PDMS layer (in step 1) with a clean glass slide. Once the PDMS is cured it can be separated from the glass slide. In this process smaller capillaries can be used to make the channels which can be removed using tweezers after detaching the PDMS from the substrate. This open network can also be bonded to another PDMS layer after the capillaries are removed.
II) If no vacuum desiccator is available to degas PDMS, the sample can be left to be degassed and cured at room temperature overnight followed by post-curing in an oven at 65°.
III) To increase the speed of PDMS curing in step 8, the Petri dish may be replaced by an aluminum foil or a glass plate and allow to use much higher temperatures inside an oven or on a hot plate to cure the PDMS within a few minutes.
IV) It is preferable to use square capillaries because there are no gaps formed at the connection sites due to the square shapes of the capillaries as opposed to the round capillaries which will have a small gap formed at the connection sites due to the rounded shape of the capillary walls, Figure 1(a1). These gaps can, however, get filled with melted paraffin.