One of the standard procedure to pump solutions, emulsions or suspensions, into microfluidic chips is based on the use of syringes, through peristaltic pumps. Syringe pumps are usually preferred over peristaltic ones, for their ease of use, for the accurate and stable control of the flow rate and, finally, for the possibility to employ sterile conditions.

Luer taper is a standardized system of small-scale fluid fittings used for making leak-free connections between a male-taper fitting and its mating female part on medical and laboratory instruments, including hypodermic syringe tips and needles or stopcocks and needles. The fitting is named after the 19th century German medical instrument maker Hermann Wülfing Luer.

There are two varieties of Luer Taper connections: Luer-Lok and Luer-Slip; Luer-Slip fittings simply conform to Luer taper dimensions and are pressed together and held by friction (they have no threads). Luer components are manufactured either from metal or plastic and are available from many companies worldwide but they are usually sold in few standard dimensions and are relatively expensive.

1. Tubing (A, B) and template syringes (C) are used for the production of Luer connectors. A: FEP (fluorinated ethylene-propylene) tubing; B: H-PTFE tubing. 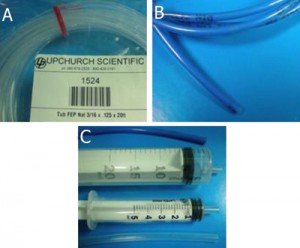 2. Tubing cutting by scalpel. The length of the Luer connector can be adjusted depending on the specific needs of the researcher (for instance, the distance between the syringe pump and the chip). Note that in the case of H-PTFE tube (B), the cutting is made with an angle of 45° with respect to the tube major axis.

3. Preparation of a female Luer adapter: A. Heating of a FEP tube end by heat gun for 1-3 min; B-D. Press and insert the male Luer of a polypropylene syringe into the heated tube. E. Cool down the tube by tap water. F. Permanent deformation of the tube end. 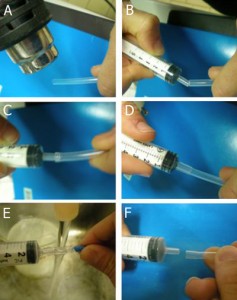 4. Preparation of a male Luer adapter: A. Heating of a FEP tube end by heat gun for 1-3 min; B-C. Press and insert the H-PTFE tube end (cut at 45°) into the heated FEP tube, cool down the tube connection by tap water until a permanent deformation is reached. 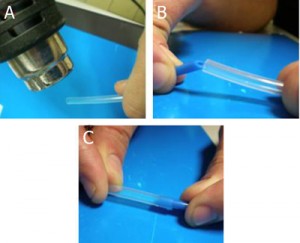 7. Examples of the use of female Luer X female Luer adapter to connect syringes to a commercial chip. 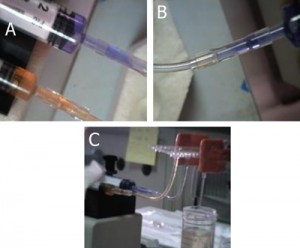 8. Examples of the use of female Luer X male Luer elbow to connect syringes to a homemade chip.