A simple and economical holder for casting PDMS chips

To fabricate PDMS chips, one usually pours an un-cured PDMS mixture into a Petri dish or an aluminum foil tray containing the patterned master, and then cures for 2 h at 85°C. However, these casting dishes or trays present some cost problems. Often a relatively high consumption of PDMS is demanded for these casting holders because quite a part of PDMS will seep into the gap between the wafer and trays due to capillary forces during PDMS pouring. On the other hand, the seepage of PDMS under the master wafer may tilt the master causing the thickness of the PDMS mold to vary from one side to the other. Furthermore these casting dishes or trays are generally throw-away holders for casting PDMS chips, which also increases the fabrication cost of PDMS chips.

This tip presents a new casting holder, made of a hollow plate whose bottom is enveloped by an adhesive tape. This casting holder can simplify the operation of releasing the cured PDMS casting, and minimize the consumption of PDMS. In addition, this holder can be used to fabricate double-side flat PDMS chips by placing a flat substrate on its top.

1. Seal the bottom opening of the hollow plate with adhesive tape to form a casting holder (Figure 1), whose diameter is a little bigger than that of master wafer. 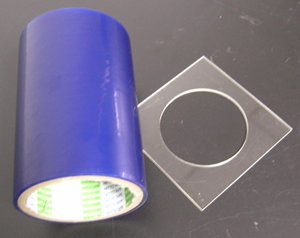 2. Place the master in the holder, and carefully apply a pressure to attach it to the tape, preventing any gaps from forming at the interface (Figure 2). 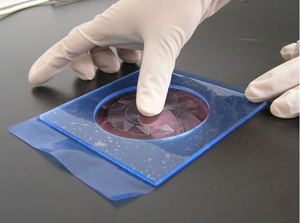 3. Mix the PDMS according to the manufacturer’s procedure [1].

4. Pour the PDMS mixture in the casting holder, and then place the holder on a hotplate at 85ºC for 2 hours.

5. Once the PDMS is cured, remove the holder from the hotplate and allow it to cool to room temperature.

6. Gently peel off tape from the bottom of holder (Figure 3). 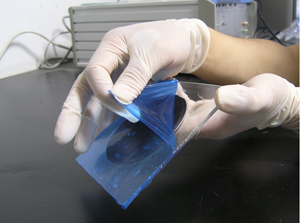 7. Carefully cut around the edge of the PDMS mold using a sharp scalpel, and separate the PDMS from the holder (Figure 4). 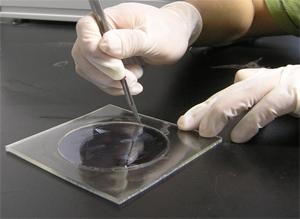 8. Finally, peel the PDMS mold from the master wafer (Figure 5). 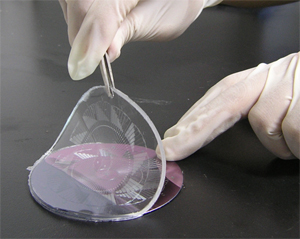 9. (Optional, for double-side flat PDMS chips) Prepare the casting holder as described above,  pour the PDMS mixture in the casting holder until the level of PDMS is a little higher than the top of holder, and then carefully drop a PET film onto the prepolymer mixture (Figure 6), which provides an easy way to remove the cover plates from the PDMS molds after curing. 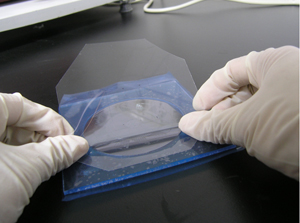 10. Apply a pressure on the top of the film with a stack of glass slides and steel block to planarize the surface of the PDMS chips, and then cure the PDMS by placing the holder on a hotplate (Figure 7). 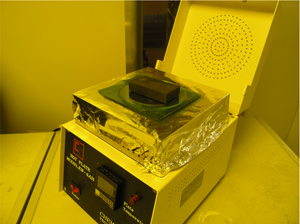 11. After curing, remove the glass slide and steel block from the top of holder, and then gently peel off the tape and PET film from the PDMS block (Figure 8). 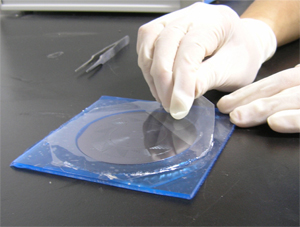 12. Finally, separate the PDMS block from the holder and peel the PDMS mold from the master.