Reviewing Databases to be Released with the CDS

While the majority of people will be relaxing over the holidays, and our team is definitely hoping for some downtime too (!), we are continuing to work on the release of the Chemical Database Service.

At present the majority of this work is in two specific areas…the development of documentation (short user guidance/videos) as well as the development of an interface to integrate to one of the new capabilities that we will deliver to users of the new Chemical Database Service: access to the Accelrys Available Chemicals Directory, commonly known as the ACD (more to be reported shortly).

The present list of databases intended for release is shown in the interface shot shown below. As you can see there is access to ACD/Labs I-Lab (Version 2 release), access to the Cambridge Structural Database, access to a number of RSC databases, the SPRESIweb database and the Inorganic Crystal Structure Database (ICSD-WWW). Of course access to the ChemSpider database will be integrated also. This is only the start of the roll out of the new CDS and will have been delivered in quite short order because of the time constraints. There is much work to be done but we are underway. 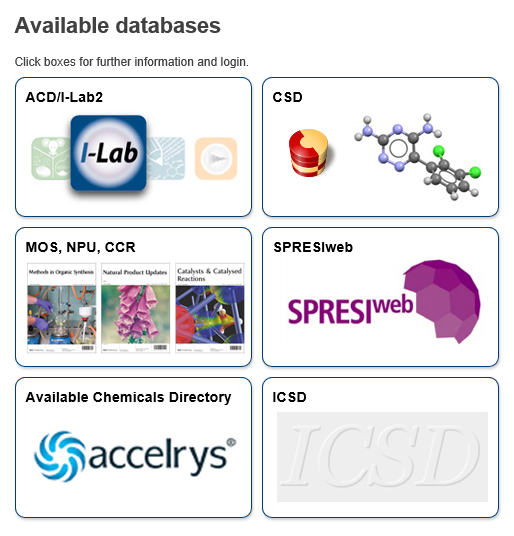