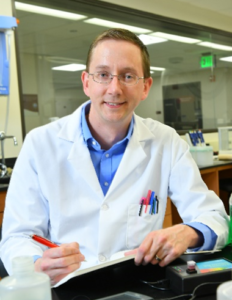 John D. Sivey is an Assistant Professor of Chemistry at Towson University, where he is also a Fisher Endowed Chair in the Biological and Physical Sciences. Sivey’s research group investigates the chemistry and consequences of highly electrophilic halogenating agents in disinfected waters. His team also examines the transformation mechanisms and fate of “inert” constituents of agrochemical formulations. Sivey teaches courses in analytical and environmental chemistry, as well as an Honors College course entitled The Polluted States of America.

Read John’s Emerging Investigators paper “Comparing the inherent reactivity of often-overlooked aqueous chlorinating and brominating agents toward salicylic acid” and find out more about him in the interview below:

Your recent Emerging Investigator Series paper focuses on the reactivity of chlorinating and brominating agents towards salicylic acid. How has your research evolved from your first article to this most recent article?

As an undergraduate student, I performed research in the area of physical organic chemistry, at which time I first became interested in chemical kinetics. While completing my MS thesis, I examined the long-term fate of polychlorinated biphenyls at the sediment-water interface of a lake in South Carolina, USA. Most of my PhD research focused on the kinetics of chlorination and bromination, particularly with respect to organic compounds in disinfected waters. While completing my PhD dissertation, it became clear that traditional models used to describe the behaviour of aqueous chlorine and bromine could not fully explain reactivity patterns associated with several types of organic compounds. Such traditional models typically assume HOCl and HOBr are the only kinetically-relevant chlorinating and brominating agents in waters treated with free chlorine. We discovered, however, that despite their typically low concentrations, several additional halogenating agents (such as BrCl, BrOCl, Cl2O, and others) can influence overall halogenation rates, especially for organic compounds with moderate reactivity toward aqueous chlorine and bromine. As my group’s paper about salicylic acid illustrates, I am still interested in fleshing out the solution conditions and organic compound classes that are most susceptible to halogenation by these less abundant (but highly electrophilic) halogenating agents.

Most of my group’s halogenation research has (until recently) been performed in synthetic waters with carefully-controlled compositions. New experiments in my laboratory are delineating the contributions of species such as BrCl, BrOCl, et al., in natural waters following disinfection. Such experiments will help us to bridge the knowledge gap between comparatively clean synthetic waters and the more complex natural systems.

In your opinion, what is the potential impact on drinking water quality presented by halosalicylates?

Converting chemical kinetic data into mechanistic models is definitely one of the most challenging aspects of my group’s research. In the salicylic acid paper, for example, the possibility of salicyloyl hypochlorite serving as a reactive intermediate never crossed my mind prior to wrestling with the data and having helpful conversations with my colleagues.

In which upcoming conferences or events may our readers meet you?

I will be at the American Chemical Society’s National Conference in New Orleans beginning on March 18, 2018. I also plan to attend the Gordon Research Conference on Water Disinfection, Byproducts and Health beginning on July 28, 2019.

I enjoy taking hikes with my two Labrador Retrievers, gardening, watching college sports, and playing arcade pinball (which, as it turns out, is enjoying a bit of a renaissance).

Were it not for environmental chemistry, I would have chosen meteorology. I had a short stint as a meteorology major as an undergraduate before switching to chemistry. If I were forced into a career outside of the sciences, it would be as a basketball referee (which was my side job as an undergraduate). It was once pointed out to me that meteorologists and referees are two jobs where you can routinely be incorrect and yet keep your job.

Look for the teachable moments in successes and in failures. My institution (Towson University) is primarily undergraduate, and I make it a point with my research students to celebrate the experiments that did not give the results we anticipated. I’m quick to remind my students that every new experiment can result in a discovery, even if that discovery is not the outcome the student (or I) had in mind.