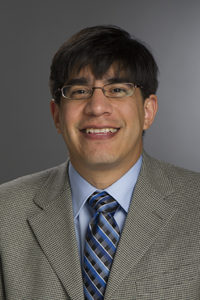 John-David R. Rocha is an Assistant Professor in the School of Chemistry and Materials Science at the Rochester Institute of Technology. His research focus is in the area of nanotechnology as a physical / analytical / materials chemist, more specifically, in the use of nanomaterials in energy, electronics, and environmental science. He utilizes his expertise in the areas of carbon nanomaterials characterization to expand areas of fundamental understanding in carbon nanotubes and graphenes, keenly working to tie the acquired knowledge to the application needs of the chemical and engineering industries. He received his BS and MS degrees in Chemistry from the University of North Texas in 1995 and 2002, respectively. Following his PhD in 2008 from Rice University, he was a Postdoctoral Researcher at the National Renewable Energy Laboratory. Prior to arriving at RIT, Dr. Rocha was a Research Scientist at SouthWest NanoTechnologies Inc. where, among other responsibilities, he led a $1.1M joint collaboration between SWeNT and a major electronics corporation to develop semiconducting SWCNT inks for thin film transistor applications. His doctoral and postdoctoral research focused on optical spectroscopic characterization of carbon-based nanomaterials including carbon nanotubes and metal organic frameworks. Rocha’s chemical research experience also includes work in gas-phase chemical kinetics of atmospheric and combustion chemistry and computational chemistry studies of organometallics. He is a member of the American Chemical Society and also participates regularly in activities with the MRS, AAAS, and the Society for the Advancement of Chicano and Native Americans in Science (SACNAS). Prior to returning to full-time chemical research in 2003, Rocha taught secondary Mathematics and Chemistry in the large urban school district of Dallas, TX, his hometown. 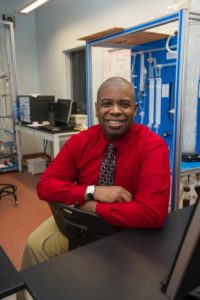 Reginald Rogers is an Assistant Professor in Chemical Engineering at the Rochester Institute of Technology.  He is head of the Nanoscale Energy and Separation Materials Laboratory (NESML).  Dr. Rogers and his group have been involved in a variety of projects investigating the separation of organic and inorganic compounds from aqueous environments using carbon-based nanomaterials.  Dr. Rogers also has projects focused on the development of cathode materials for sodium ion batteries.  He has served as a co-author on over 20 research papers and has presented at many national conferences.  Dr. Rogers recently received several awards, including the 2015 Joseph N. Cannon Award in Chemical Engineering from the National Organization for the Professional Advancement of Black Chemists and Chemical Engineers, and the 2016 Richard and Virginia Eisenhart Provost’s Award for Excellence in Teaching from RIT.

Read their Emerging Investigators article “Highly Effective Adsorption of Organic Aromatic Molecules from Aqueous Environments by Electronically Sorted SingleWalled Carbon Nanotubes“ and find out more about their work in the interview below:

Your recent Emerging Investigator Series paper in Environmental Science: Water Research & Technology focuses on single-walled carbon nanotubes, and the influence of chirality on their performance for water remediation applications. How has your research evolved from your first article to this most recent article?

Reginald: In 2011, we had a premise that carbon nanotubes could be used in water treatment applications, but never had a complete picture on their promise.  The initial results, published in Chemical Engineering Journal, laid the foundation for further expansion on the subject.  In 2013, we reported on a novel technique for using hybrid structures, which significantly improved the adsorption uptake capacity.  With this knowledge, my group published 5 other publications to further develop and clarify the adsorption behavior in batch and fixed bed systems.  This new paper on using sorted carbon nanotubes by chirality provides another stepping stone towards the development of 3-D adsorption architectures for filtration systems.  The hope is to take this knowledge and continue the growth of this fairly new adsorbent in water treatment applications.

John-David: My work with single-walled carbon nanotubes began back in 2003 with my primary expertise developed in the use of novel optical spectroscopic techniques for characterization. Following the establishment of new spectrofluorimetric analytical methods, I demonstrated the application of the techniques to study chirality specific reactivities to solve important early questions of single-walled carbon nanotube chemistry. Interestingly, these studies illustrated how early cursory studies of carbon nanotubes can be impacted by material variability and control of experimental conditions. It was with these studies between 2003 to 2008, followed by my growth of research experience in SWCNT separations work, that I developed the knowledge to partner with Dr. Rogers in broadening his exciting research in applying carbon nanotubes to water treatment applications.

Reginald: I am most excited about the opportunity for translating our results from the past research efforts into actual systems (e.g. mocked up water filtration system) to see what an end user would see from an engineered product solution standpoint.  This will calibrate us to other focus areas that may be needed to further enhance this particular type of adsorbent.

John-David: The most exciting aspects of my carbon nanomaterials research at the moment are seeing the growth opportunities in novel, unexplored application areas like environmental science and water remediation.

In your opinion, what is the biggest challenge in using nanotubes as an adsorbent in environmental systems?

Reginald: I would say that biggest challenge in using nanotubes as an adsorbent in environmental systems is being able to demonstrate their reusability on the long-range scale.  One of the biggest debates around nanomaterials is their end of life attributes.  It is my belief that we can overcome the fears of increasing toxicity levels from nanomaterials by continually exploring how to recycle these materials for reuse by the end user.

John-David: This question dovetails into the next, but essentially the biggest challenge is the intrinsic variability of carbon nanotube materials, both single- and multi-walled. These variations arise from the different large-scale production and processing techniques. Ultimately, determining how the variations can affect results in applications like adsorption of environmental pollutants can sometimes be more difficult relative to the potential advantages gained.

Reginald: The most challenging thing about my research is focusing on how to drive down the costs associated with material development of these carbon nanotube-based adsorbents.  A major hurdle in the rapid expansion of this type of adsorbent is driven by scale-up.  Given the wide variability in carbon nanotube synthesis and purification techniques, it is not as straightforward as one might expect to simply produce bulk quantities of this type of adsorbent with a small degree in variation from one batch to another.  As my group continues to develop these adsorbents, we are constantly looking for ways to minimize variability in synthesis techniques.

John-David: I would strongly concur with Dr. Rogers in his summary of the challenging aspects with respect to carbon nanomaterials research. More broadly, it is extremely difficult to demonstrate the ability to scale bench-top research results to actual real-world application level results. Quite often the disconnect between published results to the production level end-user application goals is too great to overcome. The challenge is to continually find ways to answer the important questions that can help close or reduce these gaps.

In which upcoming conferences or events may our readers meet you?

Reginald: I will be attending the 2017 Gordon Research Conference on Environmental Nanotechnology in Stowe, VT June 18th-23rd.  I will also be at the 2017 American Institute of Chemical Engineers Annual Meeting in Minneapolis, MN October 29th-November 3rd.

John-David: I will be attending the 254th American Chemical Society National Meeting in Washington, DC August 20 – 24 and the ACS Northeast Regional Meeting in October 2017.

Reginald: I am typically spending my time traveling to new locations, reading books, or staying in shape at the gym.

John-David: I enjoy spending time with my family, volunteering in the community, participating in church activities, reading books, and exercising.

Reginald: Since I love to travel, I would say I would choose to be travel agent or food connoisseur.

John-David: I was a high school chemistry teacher for a number of years, so it’s hard to speak of a profession that doesn’t fall within the broad context of the STEM fields. Potential non-chemistry related professions might be medical doctor/surgeon or a computer programmer.

Reginald: Find balance in how your handle your workload.  Don’t go overboard with trying to do everything at one time.  Be willing to say “no” when the going gets tough.  This will help you maintain sanity as you navigate all of your responsibilities.

John-David: Find like-minded colleagues to communicate with regarding all aspects of life, not exclusive to, but in particular those areas outside of research and teaching, including family life, recreation, and social areas. Also don’t sacrifice your personal life, particularly family, for your career.