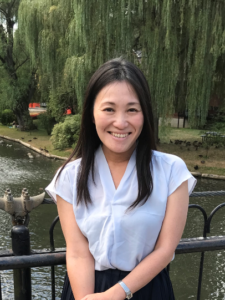 Urara Hasegawa received her B.S. and M.Eng. in Applied Chemistry from Waseda University (Japan). She earned her Ph.D. in Biomedical Science from Tokyo Medical and Dental University (Japan) under the supervision of Professor Kazunari Akiyoshi. Then, she worked as a postdoctoral fellow in the lab of Professor Jeffrey Hubbell at École Polytechnique Fédérale de Lausanne (EPFL) (Switzerland). She joined the Department of Applied Chemistry at Osaka University (Japan) as an assistant professor in 2011, and then moved to the Department of Chemical Engineering at Kansas State University in 2017. In 2020, she joined the Department of Materials Science and Engineering at Pennsylvania State University. Her research focuses on development of polymeric nanomaterials for controlled delivery of drugs and bioactive signaling molecules. She has published more than 45 peer-review papers and has received several awards including a NSF CAREER award in 2020.

When I was an undergraduate student, I had the opportunity to learn about cell sheet engineering developed by Professor Teruo Okano at Tokyo Women’s Medical University. They used surfaces coated with poly(N-isopropyl acrylamide) (PNIPAM) as a temperature-responsive tissue culture plate, which enables to harvest cultured cells by lowering temperature below the lower critical solution temperature of PNIPAM. This technology solved the problems associated with conventional techniques requiring a proteolytic enzyme to detach cells. I was excited to see how synthetic polymers can be used to manipulate living cells. Since then, I have developed a strong interest in polymer chemistry that can contribute to the advance of biomedical technologies.

I’m particularly interested in gaseous signaling molecules (gasotransmitters) such as nitric oxide (NO), carbon monoxide (CO) and hydrogen sulfide (H2S), which are generated ubiquitously in our body and serve as essential signaling regulators in many physiological and pathological processes. One of the challenges in gasotransmitter research is the lack of delivery technologies, which enable the delivery of a known amount of gasotransmitter for a specific period of time to target cells and tissues. So far, significant efforts have been made to develop small gas donor compounds that decompose to generate gasotransmitters under physiological conditions. However, the use of these compounds is limited due to the fast and uncontrolled gas release rate and toxic side effects of the donor compounds and/or their decomposition byproducts.

In the past years, my research group has been focused on developing polymeric micelles for delivery of NO, CO and H2S to cells. We have been successful in showing the advantages of using polymeric micelles for gasotransmitter delivery by slowing down release rate, reducing toxic side effects and improving therapeutic efficacy. In the recent Polymer Chemistry article, we demonstrated that H2S release rate from polymeric micelles can be modulated by controlling micellar stability, which significantly affects proangiogenic activity of these H2S-releasing micelles. The developed technology will be used as a delivery tool to enhance the fundamental understanding of H2S biology, which will lead to development of innovative approaches for the prevention and treatment of a variety of diseases.

Although there are so many remarkable researchers in the field of polymeric biomaterials science, Professor Helmut Ringsdorf at University of Mainz and Professor Jindřich Kopeček at University of Utah are the researchers who I’m inspired by. They developed the concept of “polymer-drug conjugate” in the mid 1970’s to improve solubility and blood circulation time of drugs as well as confer targeting capability. Another researcher who influenced my work is Professor Kazunori Kataoka at University of Tokyo. He is the pioneer of polymeric micelles for drug delivery.

How do you spend your spare time?
I enjoy spending time with my cats. I like to see them sleeping in the most cozy and comfortable spots in the house and hear them purring when I’m patting them. I also love visiting different places and enjoy local foods and cultures. I recently found a new hobby: Origami (Japanese style paper folding). This is a good way to relax and refresh my mind.

I still would like to choose a job related to science. A graphic designer for scientific illustration could be a profession I would be interested in. I feel graphics are a powerful tool to explain the essence and concepts of research and increase impact of new technologies and scientific findings. I love to draw and would enjoy contributing to science even if I were not a scientist.

Jerry J. Y. Chen, André J. van der Vlies and Urara Hasegawa
Hydrogen sulfide (H2S), an important gaseous signalling molecule in the human body, has been shown to be involved in many physiological processes such as angiogenesis. Since the biological activities of H2S are known to be significantly affected by the dose and exposure duration, the development of H2S delivery systems that enable control of H2S release is critical for exploring its therapeutic potential. Here, we prepared polymeric micelles with different H2S release profiles, which were prepared from amphiphilic block copolymers consisting of a hydrophilic poly(N-acryloyl morpholine) segment and a hydrophobic segment containing H2S-releasing anethole dithiolethione (ADT) groups. The thermodynamic stability of the micelles was modulated by altering the ADT content of the polymers. The micelles with higher thermodynamic stability showed significantly slower H2S release. Furthermore, the sustained H2S release from the micelles enhanced migration and tube formation in human umbilical vein cells (HUVECs) and induced vascularlization in the in ovo chick chorioallantoic membrane (CAM) assay.