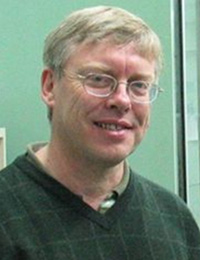 Graeme Moad was born in Orange, NSW, Australia. He obtained his BSc (Hons, First Class) and PhD from the University of Adelaide in the field of organic free radical chemistry. After undertaking post-doctoral research at Pennsylvania State University in the field of biological organic chemistry he joined CSIRO in 1979 where he is is currently a chief research scientist.  He is also a project leader within the Cooperative Research Centre for Polymers. Dr Moad is author or co-author of over 150 publications, co-inventor of 34 patent families (12 relate to the RAFT process) and co-author of the book “The Chemistry of Radical Polymerization”. More than 12,500 papers cite his work and his h-index is 52. His research interests lie in the fields of polymer design and synthesis (radical polymerization, reactive extrusion, polymer nanocomposites) and polymerization kinetics and mechanism. Dr Moad is a Fellow of the Royal Australian Chemical Institute and he has recently been elected as a titular member of the Polymer Division of the International Union of Pure and Applied Chemistry.

Please follow the link for further information on Graeme’s laboratory and his recent paper in Polymer Chemistry.

No specific inspiration. I sort of drifted into science and chemistry through a process of natural selection.

What was the motivation behind the research in your recent Polymer Chemistry paper? (DOI: 10.1039/c2py00529h)

The motivation for this particular line of research was provided by my colleague John Tsanaktsidis and post doc Shadi Houshyar who, having heard us talk on the precision of RAFT polymerization, had the perhaps naïve idea that the process might be used to construct polymer chains precisely.  While aware of their endeavour, I only became directly involved after they showed that it didn’t work.

The decision to send this paper to Polymer Chemistry was a direct consequence of the arrival of an invitation from Professors Christopher Barner-Kowollik, Jean-François Lutz, and Sebastien Perrier to contribute to the Themed Issue on New Methods of Polymer Synthesis planned for 2012. This fortuitously occurred at the time that we were contemplated publication of the work. Of course we were three months behind the deadline with our submission. The emerging reputation of Polymer Chemistry as one of the premier journals in the field was also important in our choice.

Spare times?  Much is taken up by our two children. Another large portion by that chemistry that does not directly align with current work, writing papers… In what little remains: bushwalking, reading, maintaining a genealogical web site.

I suspect no matter what profession I chose I would still be a scientist. My mother thought I should go into banking. An aptitude test taken in final year of high school indicated I should be an architect (in a chemistry way, maybe I took that suggestion on board).  But having obtained a borderline marks in English, and grades in Maths, Chemistry and Physics sufficient to gain a University Scholarship (in the only year in which a good grade in English was not a prerequisite), my path was set.

I did rebuild a house once (in my spare time, pre-kids), that was enjoyable.