A chemical approach to biological antifreeze 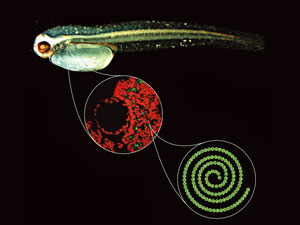 Scientists in New Zealand and the US have synthesised a protein that helps inhibit ice crystal growth in Antarctic fish.

Antifreezes are chemical additives used to lower the freezing point of water. While ethylene glycol is widely used in motor vehicles, it is too toxic for use in foodstuffs. Antifreeze proteins are a non-toxic alternative and are currently added to some brands of ice cream to improve the ice cream’s texture by controlling the growth of ice crystals.

A 132 amino acid protein called antifreeze potentiating protein (AFPP) was recently identified in Antarctic fish. AFPP enhances the antifreeze effects of known antifreeze glycoproteins by binding to ice crystals, but is difficult to isolate and purify in quantities sufficient for more widespread use. A chemical synthesis of AFPP would enable the large-scale production of AFPP. It would also give researchers a way to make labelled versions of AFPP for further studies

Margaret Brimble and Clive Evans at the University of Auckland, and their co-workers, have devised a convergent chemical strategy to prepare AFPP. A solubilising tag to improve the handling and purification of intermediate peptides was used in the synthesis as AFPP is not very soluble in aqueous solution and prone to aggregation.