Archive for the ‘Hot Article’ Category

The first advance articles for Materials Horizons have been published!

Particles that can undergo directed self-propulsion are desirable for colloidal cargo delivery and self-assembly. This paper describes the synthesis of silica–manganese oxide “matchstick” colloids that undergo catalytic self-propulsion by consumption of hydrogen peroxide. Chemotaxis is observed when particles are placed in a fuel gradient. 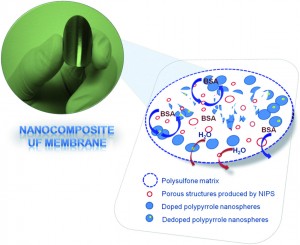 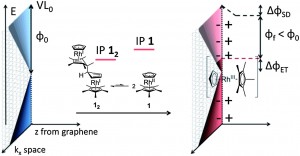 In this paper, CVD graphene has been n- and p-doped using redox-active, solution processed metal–organic complexes. Electrical measurements, photoemission spectroscopies, and Raman spectroscopy were used to characterise the doped films and give insights into the changes.

Many approaches to mimic and understand the dynamics of vesicle budding lack precise control over vesicle membrane properties or require external stimuli to induce budding. This paper reports the use of copolymer loaded double-emulsion droplets to precisely control size, size distribution, composition and morphology of giant polymersomes. By tuning the copolymer concentration in the polymersome membrane, the authors show how they identify conditions under which vesicles spontaneously bud from the polymersome surface. These findings have important implications for the design of copolymer membranes and contribute to the understanding of polymersome formation from double emulsions.