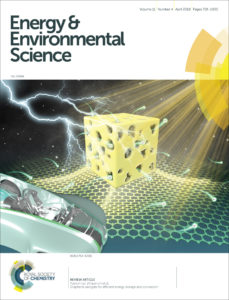 Lectureship and Themed Issue details
Recognising and supporting those at an early stage of their independent career within the fields of energy and environmental sciences, the lectureship is a platform for early career researchers to showcase their research to the wider scientific community. Formally based on the most-read articles within the journal in a given year, we are delighted to announce that from 2019, the EES Lectureship will be awarded through a nominations process, whereby nominations of candidates are invited from our fantastic community.

The lectureship recipient will receive £1000 to cover travel and accommodation costs to attend and present at a leading international meeting. The recipient will also be invited to contribute a Review-type article to EES.

Eligibility
To be eligible for the lectureship and themed issue, candidates must:

•    Have completed their PhD
•    Have published in EES in the past 3 years
•    Be working in a research area within the scope of Energy & Environmental Science
•    Be at an early stage of their independent career (typically this will be within 10 years of completing their PhD, but appropriate consideration will be given to those who have taken a career break or followed a different study path).

Selection criteria, nomination and judging process
•    Nominations must be made via email to ees-rsc@rsc.org using the EES Lectureship nomination form and a letter of recommendation.
•    Individuals cannot nominate themselves for consideration.
•    Selection will be made by the EES Editorial Board.
•    The Lectureship winner will be selected based on their nomination, with due consideration given to the letter of recommendation, candidate biography, research achievements, previous EES publications and overall publication history.

Submit a nomination
To be considered for the 2019 Lectureship, the following must be sent to the Editorial Office.
•    A letter of recommendation
•    A complete nomination form