We were delighted to speak to Conrad Goodwin about his #ChemComm1st article as a corresponding author: Low-spin 1,1′-diphosphametallocenates of chromium and iron. Find out more about Conrad and his research in our interview below. 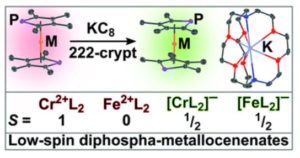 What are the main areas of research in your lab and what motivated you to take this direction?
I’m currently a PostDoc Fellow working at Los Alamos National Laboratory. My main research is into redox, electronic structure, and covalency in transuranium elements, those after uranium. As such I’m always thinking of new ligands and metal-element bonds that might be interesting and help us learn more about how the actinides interact with the rest of the periodic table. These are really scarce resources though, not to mention the radiation hazard, so I’ve got to make use of opportunities to contribute elsewhere as well. I was inspired by some work from my time at Manchester working on anionic transition metal metallocenes, and decided to look into using these phospholide ligands to achieve the same thing and see how the phosphorous would change the bonding and structure. As an added benefit, these new anionic 1,1’-diphosphametallocenates can act as bidentate monoanionic ligands for the other side of my work into actinides.

Can you set this article in a wider context?
Metallocenes are everywhere: ferrocene even works as an anti-knocking agent in petrol for cars. The oxidation (taking an electron away) of metallocenes is also a defining feature, and one many chemists will be familiar with. Whether that’s simply because they’ve seen the [Fc]+/0 couple in electrochemisty, used [Co(Cp*)2] as a reducing agent, or perhaps they’ve seen a popular f-element version like [Sm(Cp*)2]. But going the other way, reduction (adding an electron), has been barely explored until recently with the report of [Mn(Cp*)2] anions and [M(Cpttt)2] (M = Mn, Fe, Co; Cpttt = {C5H2–tBu3}). The former [Mn(Cp*)2] anion is really stable, it’s an 18e metallocene – but the latter Cpttt examples were all very temperature sensitive.
What we tried to do here was use a slightly different ligand set to try and hit a middle-ground between these stability extremes, and address two problems we saw with the previous examples: 1) the steric bulk of Cp* and Cpttt help stabilize those complexes but also make the metal quite inaccessible to do any further chemistry; 2) by adding a Lewis-basic phosphorous into the ligand we have added a binding site which means we have an anionic complex where the charge is spread across two rings, and a metal of our choosing in the middle. I think this has the potential to be a very interesting new ligand set, complementary to the ubiquitous ferrocenophane class, but where the anionic charge formally resides at the metal.

What do you hope your lab can achieve in the coming year?
The coming year (2021) is actually my last at Los Alamos, and hopefully my last as a PostDoc. I’m hoping to make the move to run my own research group by the end of 2021. As for my current work, we have several transuranium projects that are wrapping up, and whose publication I hope will excite the broader chemical community about these elements. We’ve got some work comparing lanthanide and actinide covalency, a topic that’s really relevant now as the debate surrounding green energy and nuclear fuels continues, and another exploring organometallic chemistry right at the edge of the periodic table.

Describe your journey to becoming an independent researcher.
I’m currently in a halfway house towards independence. After my PhD I was lucky enough to receive an EPSRC Doctoral Prize which was a 1-year PostDoc Fellowship to do a short research project based on my own proposal, but within an established lab. I finished this and then moved to Los Alamos as a J. Robert Oppenheimer Distinguished Postdoctoral Fellow which again was to do work that I proposed to do but I’m still supervised by a mentor (Andrew Gaunt). So this afforded me the flexibility to pursue a little piece of independent research on the phosphametallocenes here. As for my next steps to independence, my work at Los Alamos working with transuranium elements has afforded me a skillset and expertise with an area of the periodic table not many get to work in. So I’m trying to leverage this towards an independent career and research group working in this area.

What is the best piece of advice you have ever been given?
“Have you tried crystallizing that from toluene?” – David P. Mills, in regards to every molecular compound ever. But jokes aside, I’ve been fortunate enough to meet and learn from some of the giants in the molecular f-element research field, and they have all said some variation of: “Approach research with an open mind and question established dogma”. This is so important, and applies to every level of doing basic research. It can be as simple as: whatever way you were taught to do something doesn’t have to be the only way – so learn from others; to not assuming that certain elements behave a certain way and going out of your way to dispel that assumption. I know of at least one academic who tries to recruit PhD students from outside of their own research field so that they come to their lab with a blank slate and won’t be tempted to assume something will/won’t work.

Why did you choose to publish in ChemComm?
I’m a big fan of the RSC’s activities and also the publishing model. ChemComm has a really broad readership and I wanted this work to be seen and help ignite this new area of research into anionic metallocenes. On top of that the editorial team were incredibly helpful and responsive, which made the whole process really easy.

Read Conrad’s #ChemComm1st article and others in ChemComm Milestones – First Independent Articles. Follow the hashtag #ChemCommMilestones on our Twitter page for more: @ChemCommun