I remember a time when mobile phones weren’t so power hungry, and when my phone could go a week on one charge. Admittedly, that was before it had a colour screen, internet connectivity and a hundred other bells and whistles. Increased device connectivity, in particular, has led to a huge increase in power demands and the need for better battery technology.

Wouldn’t it be marvellous if your phone battery generated its power from a wide selection of renewable sources? Khiem Van Nguyen and Shelly Minteer from the University of Utah look toward this possibility in their most recent ChemComm, which describes the use of DNA hydrogels in the production of an enzymatic biofuel cell.

The authors describe how they used the self-assembly of DNA monomers under physiological conditions to form a DNA hydrogel capable of trapping glucose oxidase, the most widely used enzyme in enzymatic biofuel cells. This DNA hydrogel remains permeable to small molecules, such as the battery fuel, whilst successfully trapping the enzyme close to the electrode surface.  Enzyme immobilization on the electrode surface is critical to achieve an effective enzymatic biofuel cell, and this model biobattery was shown to have a similar performance to previously reportedⱡ glucose oxidase biofuel cells. 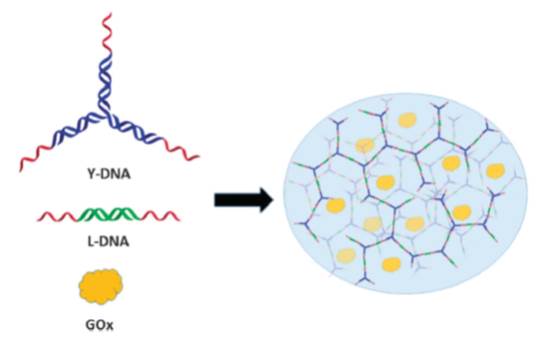 With enzymes capable of oxidising a wide range of fuels, from alcohols and carbohydrates to amino acids, it may not be too long until a multi-enzyme biobattery is created that can be powered by the sweat from your skin. Then you’ll be able to browse the internet wherever and whenever you want…provided you have signal, of course.